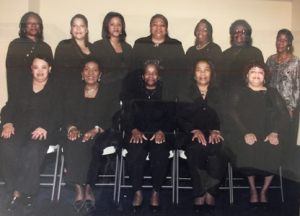 The Americus City Federation of Colored Women’s Clubs was founded in 1949 as an affiliate of the National Association of Colored Women’s Clubs (NACWC). The NACWC was founded in 1896, at their First Annual Convention hosted by Phyllis Wheatley, in Washington, D.C. They adopted as their motto, “Lifting as We Climb”, to demonstrate to the world that its aims and interests were identical with those of all aspiring women, regardless of color. Its founders included Harriet Tubman, Ida B. Wells-Barnett, Mary Church Terrell, Margaret Mary Washington, Frances E.W. Harper, and Josephine St. Pierre Ruffin.

The City Federation of Colored Women’s Clubs of Americus is a collective of individual local clubs, all of which subscribe to the holistic advancement of women and girls. When the Colored Hospital closed in 1953, the Women’s Clubs purchased the building from the Sumter County Hospital authority for $8,000. They immediately opened a nursery for working mothers, a Boys and Girls Club, and eventually a Community Youth Center that provided after school activities for African Americans who were denied the use of city and county facilities.

During the Americus Civil Rights Movement of the 1960’s, the Women’s Club provided space in the east wing of the building for a “Freedom Center”, operated by young student activists under the guidance of the Student Non-Violent Coordinating Committee (SNCC). The students organized and opened a library, taught literacy classes to prepare citizens to register to vote, and planned student-led protests against discrimination and voter suppression.